You may have seen products in stores with the OEKO-TEX label and wondered what exactly this means.

OEKO-TEX is short for The International Association for Research and Testing in the Field of Textile and Leather Ecology and was started in 1992. It oversees several textile certifications that require companies to undergo regular independent testing in order to use OEKO-TEX labels on their products.

The OEKO-TEX Standard 100 is its most common certification and the one consumers are most likely to encounter in their day-to-day lives. It guarantees that all aspects of a textile, including buttons, zippers, and other finishings, are free of 100 harmful chemicals that are often found in textiles. Products are pulled directly from retail shelves in order to be tested by approved labs, and are retested during audits to ensure quality control, according to an interview in Women’s Wear Daily with one of the founders of OEKO-TEX Association.

What Harmful Chemicals Are in Clothes?

Toxic chemicals, such as phthalates, formaldehyde, certain azo dyes, and pesticides, are often used in the finishing states of textile production so companies can streamline production or create desirable properties for fabrics, such as wrinkle resistance. OEKO-TEX protects end users from all of these toxic chemicals.

The NIH refers to phthalates as “the everywhere chemical,” and repeated exposure has been associated with adverse reproductive health in both men and women and developmental problems in children. Phthalates are commonly used to print logos on clothing and in the production of accessories.

Azo dyes are the most common kind of synthetic dyes used today, because they resist breakdown from being washed and exposed to light, and because they are cheap to produce. Some Azo dyes can cause cancer and some others are allergenic; these would be controlled by an OEKO-TEX Standard 100 certification. However, the production of azo dyes generates toxic wastewater that pollutes the environment in developing countries with high rates of textile production. A certification that solely tests end products cannot control byproducts of the manufacturing process.

Formaldehyde is used to create wrinkle- and stain-resistant finishes on products. If you have ever bought a non-iron dress shirt and noticed a distinctive chemical smell, you have encountered formaldehyde. When worn on the body, formaldehyde can cause rashes, eczema, and immune responses, according to the United States Government Accountability Office. Formaldehyde is an even bigger risk for garment workers as it’s a known carcinogen when inhaled over long periods of time. Again, this is not a risk that OEKO-TEX Standard 100 monitors.

For each of its tested chemicals, OEKO-TEX determines the safe levels for these chemicals with four different classes: class one is for textiles used for babies, class two for textiles worn near the skin, class three for textiles not worn near the skin, and class four for decorative textiles. For example, while formaldehyde is completely banned for class one textiles, slightly higher amounts are allowed in each class thereafter to the level that is deemed safe for that class.

Are Textile Certifications and OEKO-TEX Greenwashing?

One potential criticism that has been raised about textile certifications, such as OEKO-TEX, is that they provide a way for companies to claim they are more sustainable than they actually are. For example, the Target sheets pictured emphasize they are certified by OEKO-TEX, but are made out of 100% polyester. Because it’s a synthetic, plastic-based material, polyester is resource intensive and doesn’t biodegrade.

The Changing Markets Foundation wrote a report earlier this year entitled “Licence to Greenwash,” which analyzes ten different textile certifications, including OEKO-TEX, and how effective they are at driving change in the fashion industry. The foundation gave OEKO-TEX high scores for transparency and for driving improvement in the industry, but also pointed out that OEKO-TEX is limited in scope and “cannot be credited with instigating any industry-wide transformation.” While keeping harmful chemicals out of the clothing you wear is certainly an important endeavor, the OEKO-TEX Standard 100 only looks at finished products; it does not investigate chemical usage during the manufacturing process and how this may harmfully affect the environment and the people who make your clothes.

In 2015, OEKO-TEX introduced the Made in Green label (pictured). It goes above and beyond the Standard 100 requirements to cover things like social and environmental responsibility. However, this program has a far smaller reach than the Standard 100 program, and most consumers probably don’t recognize the difference between the two certifications.

In conclusion, OEKO-TEX is a great tool for consumers to learn whether a textile contains safe levels of 100 commonly used harmful chemicals. It’s a better certification program than most in the industry, but it does have blind spots and has yet to bring about mass industry change. Even though it’s not perfect, and no one certification system can be, it helps people to be mindful of the toxins they expose to themselves and their families.

Tracy Meserve is the librarian at The George Washington University Museum and The Textile Museum. She also acts as the associate editor of The Textile Museum Journal. She is currently pursuing an M.A. in Decorative Arts and Design History from the Corcoran School of the Arts and Design at the George Washington University, with a focus on textile arts. She holds a Master's in Library Science from the University of Maryland (2013). Last Updated on February 3, 2022 Wool is an amazing, insulting material and more brands... When looking for sustainable fashion 'Regenerative' and 'Organic' are two buzzwords you'll likely see, but... While researching sustainable textiles, you may have come across phrases like “organic bamboo,” “rayon made... 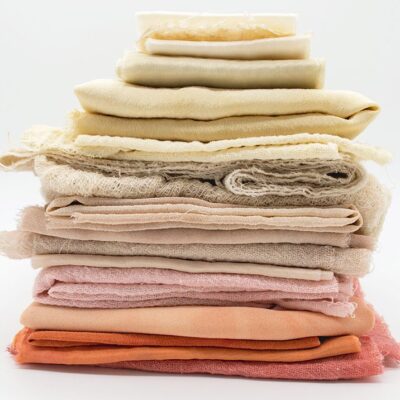 Last Updated on October 11, 2022 Making your own clothing is already a lot more... Last Updated on November 16, 2022 We’ve already shared why linen is such an amazing... In the world of sustainable fashion, materials are always a hot topic. Whether we’re talking...